London’s Hayward Gallery plays host to a brand new immersive exhibition entitled Lee Bul: Crashing. The space displays over 100 pieces of Bul’s work, spanning from the late 1980’s to the present day. The works include a blend of installations, paintings, ceramics and films. Read on to discover more about artistically pioneering exhibition. 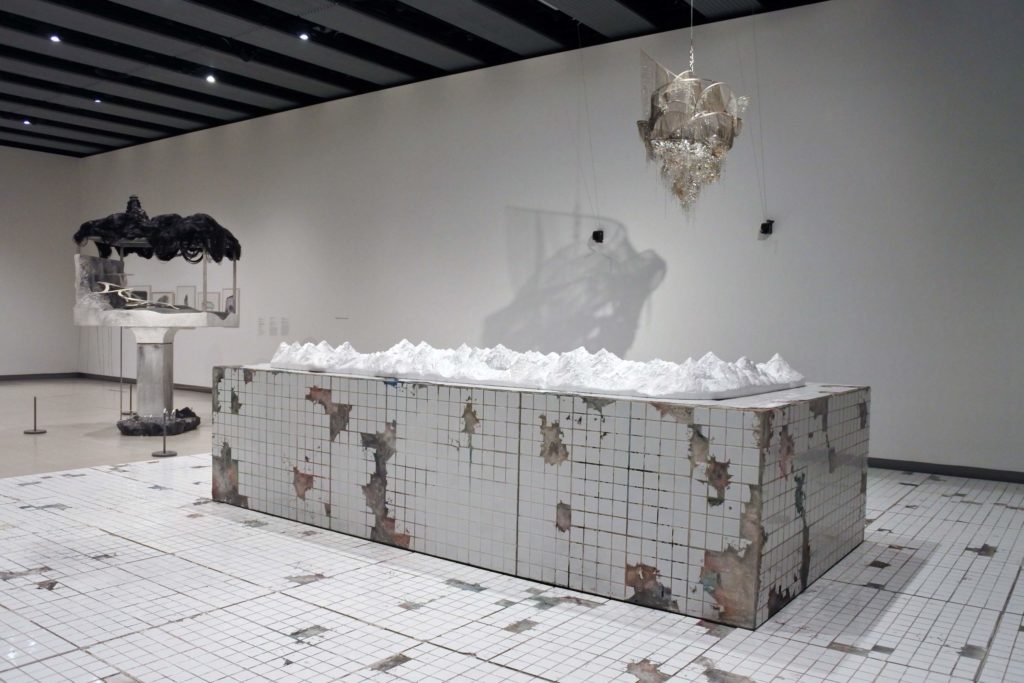 Born in Seoul, South Korea in 1964, Lee Bul trained initially in sculpture, using this as a starting point to begin exploring other artistic avenues. She emerged onto the art scene in the late 1980’s with dynamic pieces of thought-provoking and dramatically distinctive work that revolved around the diverse topics of nature, gender and sexuality.

The exhibition Lee Bul: Crashing encapsulates 30 years worth of art within one carefully curated space, including 16 never-before seen pieces. 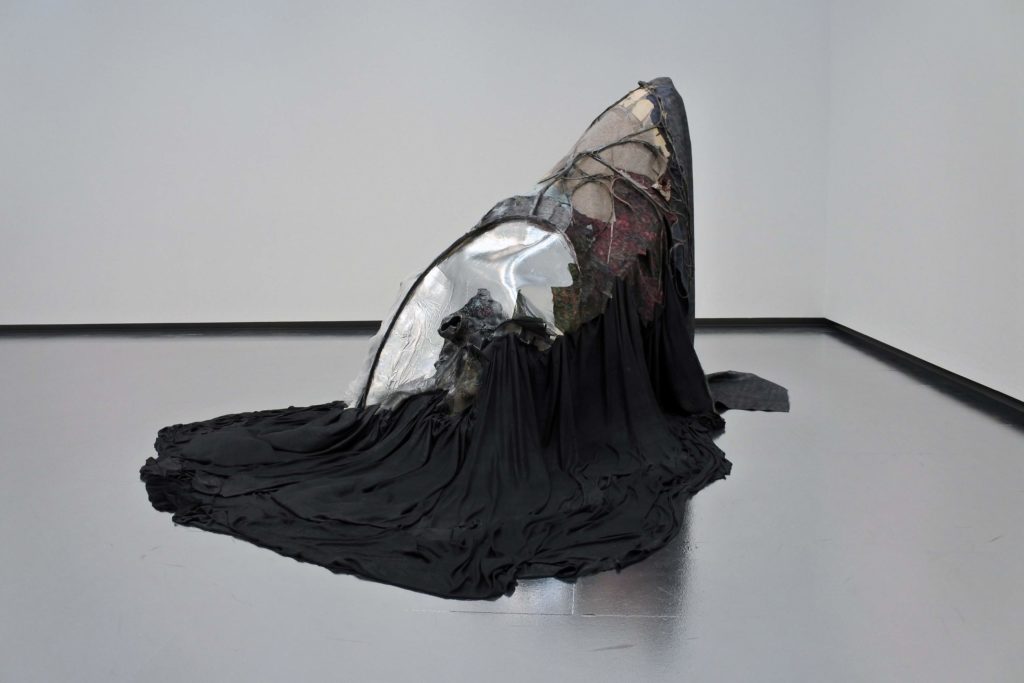 As you enter the pure, white walls of the exhibit space you are met by an overbearing abyss of broken mirrors and a distorted human-like sculptures, including Monster Black (2011) and Civitas Solis II (2014). Suspended from the ceiling are pieces taken from the Cyborg series which are a collective of hybridised human figures. 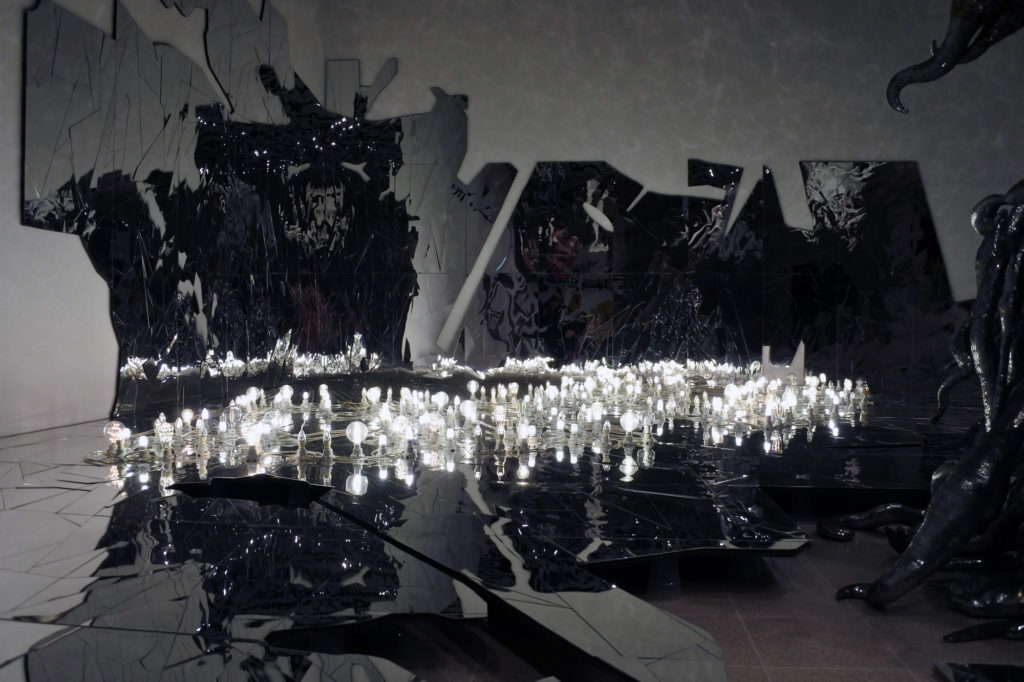 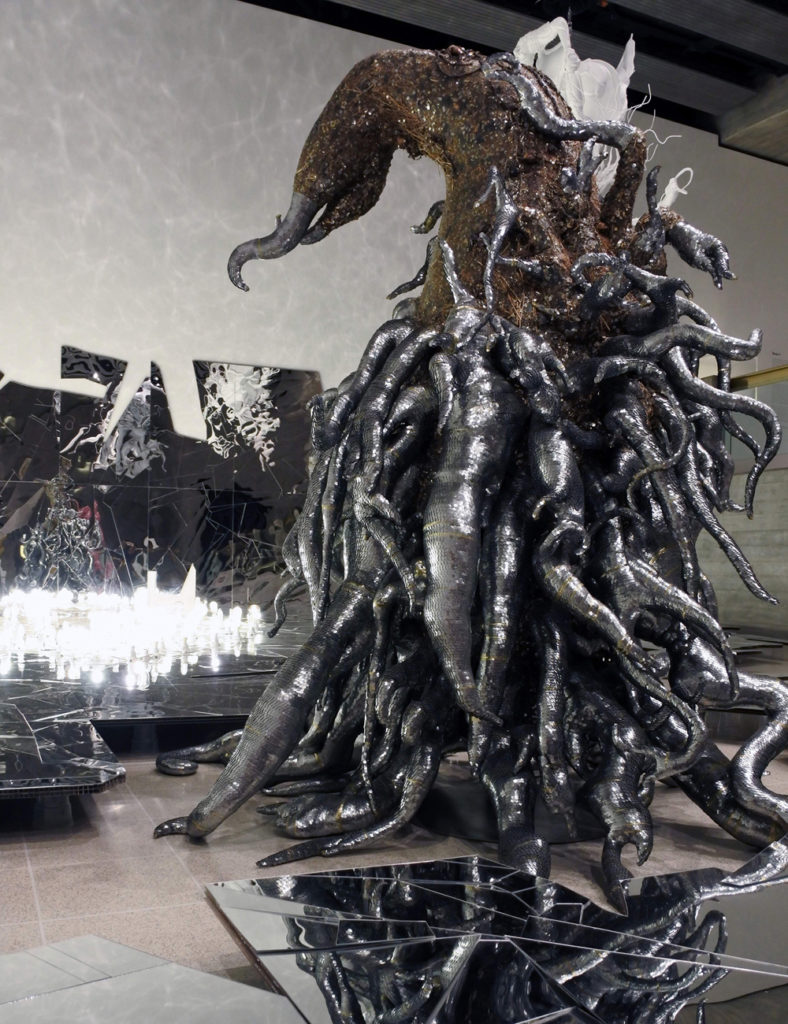 Continuing along the path visitors are drawn into room 2 which hosts a selection of early works and immersive films that display live performances. Described by Bul herself as ‘a spontaneous mixing of life and art’, the works explore the themes of desire and identity. A series of delicate paintings on silk and velvet hang along the walls, expressing Bul’s love of using mixed mediums. In the centre of the room rests a slice of futurism with Live Forever Part 1 (2001), a space age pod depicting an alien-like form of transportation, furthering her quest to explore the relationship between the human body and technology. 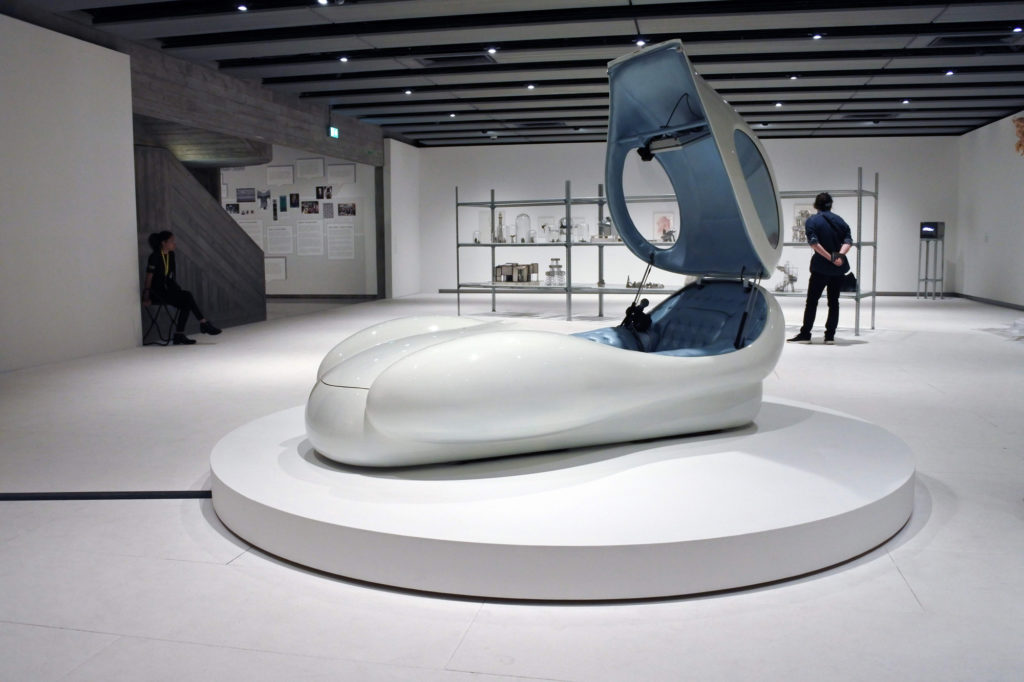 The immersive experience continues throughout the exhibition, with the show-stopping piece After Bruno Taut (Devotion to Drift) (2013), a dropped chandelier-like installation that resembles a scene reminiscent of icy landscapes, with mountainous peaks and crystal encrusted roadways. 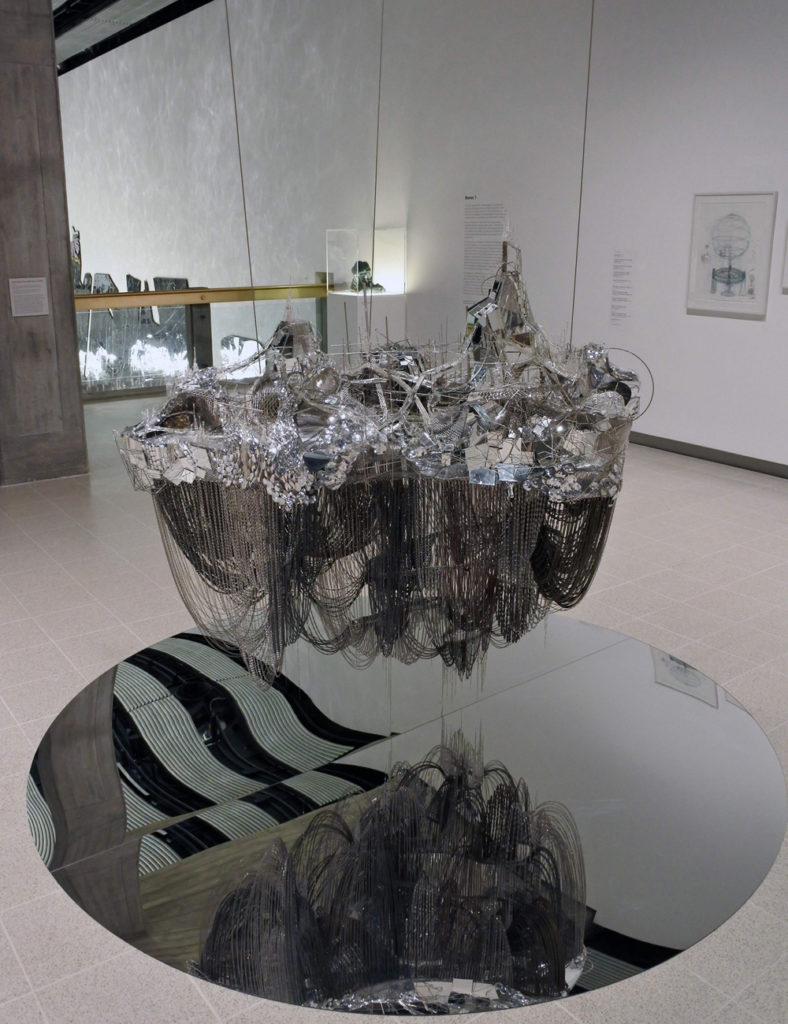 Upstairs brings you to a stark, mirrored-floor room filled with the presence of Willing To Be Vulnerable – Metalized Balloon (2015-16), a piece that resembles a Hindenburg-like airship or Zeppelin, a form of transportation that promised a solution for the future. 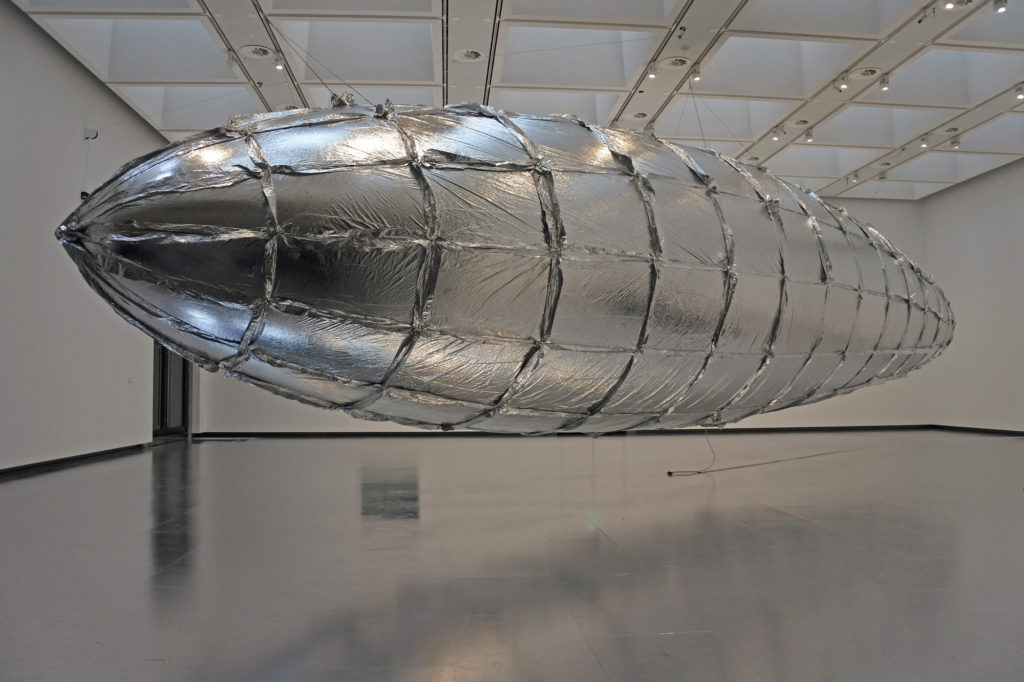 The final space ensures you are encapsulated by a mirrored labyrinth entitled Via Negativa II (2014). This piece was created to intertwine the use of both body and brain by physically seeking a way through the mirrored paths to the ultimate destination point which is an infinite space emblazoned with illuminated bulbs. 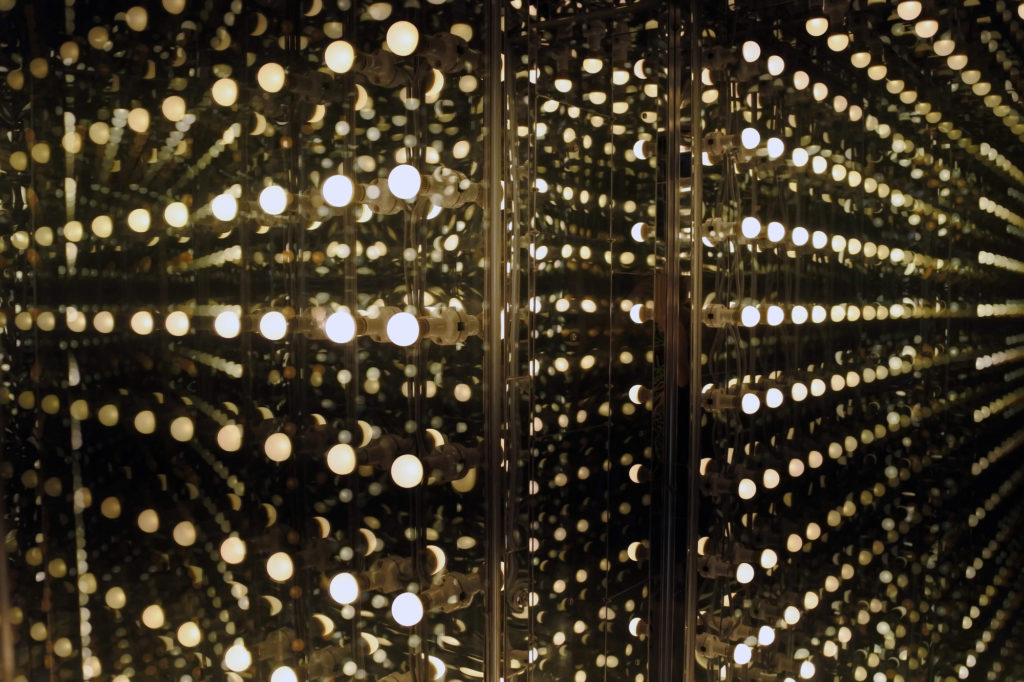 The exhibition invites you to totally submerge yourself into a future world, giving a glimpse of what is yet to come, exploring ways in which our bodies will have to adapt to technology and surroundings.